Egg freezing (cryopreservation) is a process in which a woman’s eggs (oocytes) are extracted, frozen and stored to preserve reproductive potential in women of reproductive age. It is identified as a clinically implemented procedure by the American Society for Reproductive Medicine.

The patient first gets blood tests and pelvic ultrasound. Ovarian stimulation is carried out using injectable hormonal medications. Then the patient is sedated and oocytes and the surrounding fluid in the ovarian follicles are aspirated vaginally. The maturity of the eggs is assessed under the microscope, and mature ones are cryopreserved. Vitrification is the preferred method for cryopreserving eggs, by ultra-rapid cooling into liquid nitrogen. When pregnancy is desired, these cryopreserved eggs are placed in a warming solution and assessed. A single sperm is injected directly into the viable eggs (intracytoplasmic sperm injection). The fertilized eggs will grow in culture, and then the embryo(s) are transferred into the uterus to achieve pregnancy, 3-5 days later. 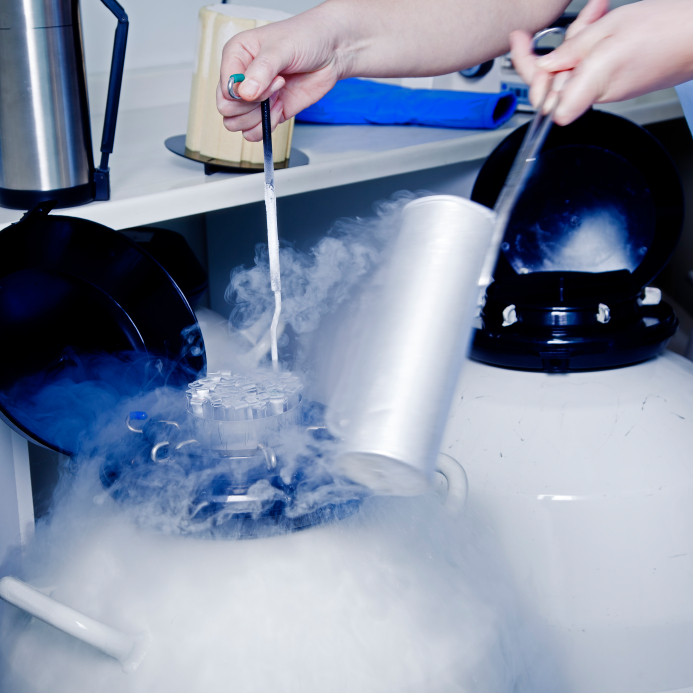 The most important determinant of success is the woman’s age at the time of the process. The younger a woman is when she freezes her eggs, the better her chances will be at having a successful pregnancy. Younger women are more likely to have eggs that are genetically normal and they are more likely to respond better to egg freezing treatment.

Frozen/thawed eggs will have the same chance of becoming a baby as they would if you fertilized them and used them in an IVF cycle now. A recent study published in the journal Human Reproduction in 2010, the success rates of 600 women undergoing in vitro fertilization with donor eggs from young, healthy women were assessed. The researchers found no significant difference in pregnancy rates between the frozen/thawed and the fresh eggs groups, confirming the effectiveness of oocyte cryo-storage.

With vitrification, 90–95% of eggs frozen survive the freezing and thawing process, as compared to just 61% of slow-frozen eggs. Live birth rates for egg donor cycles are about 50% regardless of the age of the woman carrying the baby. Another study from Harvard showed that women under 35 who freeze 10–20 eggs have 70 – 90% chance of at least one live birth later on.

It is important to note that egg freezing success rates are just general rules. Predictions tend to be more accurate when personalized based on the individual’s egg quality and quantity.

It is not responsible for a fertility clinic to give you a 100% guarantee that freezing your eggs now will result in pregnancy and live birth when desired.

Risks:
They are similar to those associated with in vitro fertilization, and include small risks of ovarian hyperstimulation syndrome, infection, and bleeding.